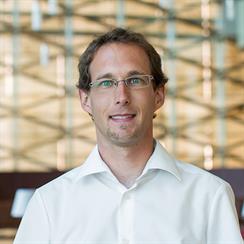 As part of the current promotion cycle of the University, Professor Simon Krattinger is being considered for promotion to Associate Professor of Plant Science. A requirement of the promotion process is to give a technical colloquium. This colloquium will provide interesting insights into the research interests and achievements of Prof. Krattinger.

Abstract:
Cereal crops are of paramount importance for global and regional food security. Cereals are grown in greater quantities and provide more food energy than any other type of crop. One research direction of my group focuses on the development of genomics-based tools to clone disease resistance genes in the cereal crops wheat and barley. About a fifth of the global wheat production is lost to pathogens and pests each year. Of particular importance are fungal pathogens belonging to the genus Puccinia, the causal agents of the devastating rust diseases. Despite the planting of elite cultivars and improved disease management practices, rust epidemics have become more severe over the past two decades, which is attributed to the emergence and rapid spread of new and highly virulent pathogen races. Although hundreds of disease resistance genes have been genetically characterized in the wheat gene pool, only a handful of them have been cloned. The development of genomics-assisted gene cloning protocols has significantly accelerated and facilitated gene cloning, which has led to a deeper understanding of the fundamental molecular mechanisms that control disease resistance. The results generated in our group lay the foundation to deploy knowledge-guided strategies in disease resistance breeding, which might allow us to eradicate the top wheat diseases in the coming 5-10 years. A second, complementary research direction of my group studies the genetic diversity in cereal crop species, underutilized crops and wild crop relatives. We address fundamental questions in cereal genomics and crop evolution, which forms the basis to accelerate plant breeding, harness genetic diversity, and establish new crop species that are adapted to extreme environments.

Bio:
Prof. Simon Krattinger obtained his PhD in 2009 from the University of Zurich, Switzerland. After spending three years as a Marie Curie postdoctoral fellow at CSIRO Plant Industries in Canberra, Australia, he became an independent group leader at the University of Zurich supported by an Ambizione early career grant of the Swiss National Science Foundation. In 2017, he joined the Center for Desert Agriculture at KAUST as an Assistant Professor.