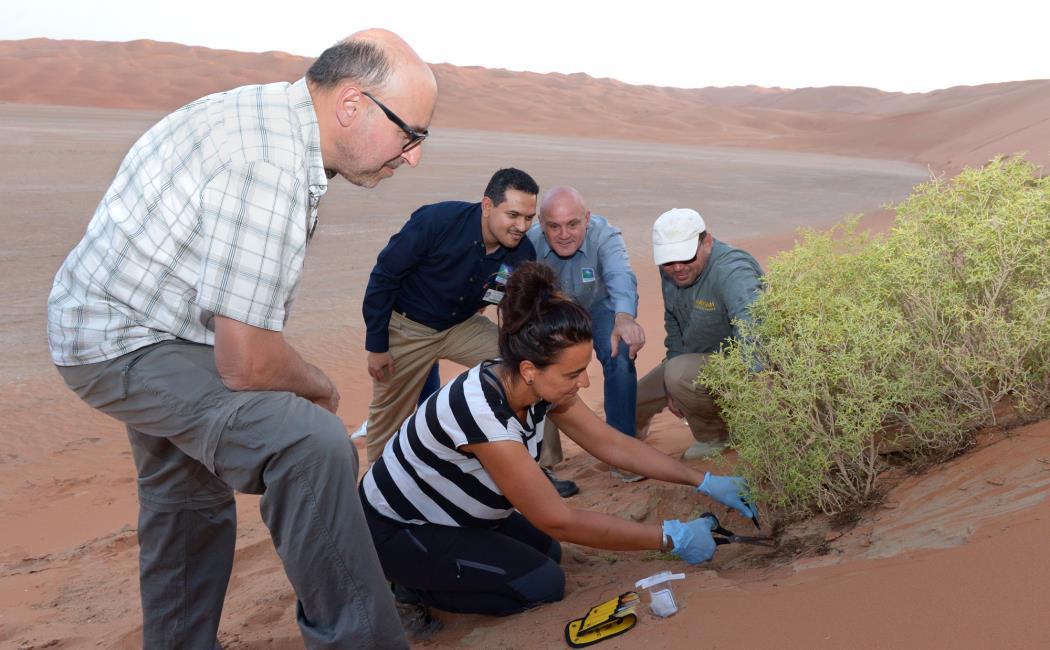 Deep within the Rub’ al-Khali (Empty Quarter) desert, unusual plant species grow that seem to defy all logic. Despite a summer heat of 50 degrees, no irrigation, near zero rainfall, and a lack of organic material in the desert sands, a few unique plant species have found a way to survive, where all other plants cannot.

“How is this possible? What specialized properties do these plants possess? Why do they grow in some areas of the Rub’ al-Khali, but are absent in others? To safeguard and increase the numbers of these rare species inside the SWS, questions such as these will need to be answered,” explains Wayne Sweeting, SWS, Scientific and Operations Coordinator.

“KAUST and Saudi Aramco have a well-established and enduring relationship. Indeed, Saudi Aramco managed the design and construction of KAUST. As a result, we are fully aware of the technical capability and expertise they possess. As soon as we were ready to commence ecological research in the sanctuary as part of Shaybah Environmental stewardship, KAUST was naturally our first point of call. We look forward to collaboratively working on biodiversity research projects and jointly publishing the results in the future to protect and further improve the fragile environment around us” says Samer Al-Abduljabbar, Superintendent, Shaybah Producing Operations Division.

Professor Daffonchio leads the Extreme Systems Microbiology Lab (ESM Lab) within the BESE Division at KAUST. He and his team investigate soil microbial ecology in extreme arid environments. His current projects include studies in the Sahara and Namib deserts. He proposes that a key factor to the plant’s survivorship in the Empty Quarter may actually be due to the tiniest of creatures, including bacteria, fungi, and other micro-sized life forms, which form a microbial community inhabiting the golden desert sands.

“Take spear grass, a common plant found across the sanctuary, as an example. The plant has a special above ground leaf architecture, which captures morning dew from the air and funnels it down to the underground root system. Living on the moist plant roots is a jelly-like microbial mass. In return for the moisture delivered by the host plant, it appears the microbial life forms produce and provide the plant with all the nutrients and other requirements it needs to survive,” said Professor Daffonchio.

KAUST researchers and the SWS rangers installed a suite of underground probes, which will log temperature and other environmental parameters for six months to characterize and compare soil conditions in areas comprising sand dunes and salt flats (sabkhas). Additionally, a number of soil, root and vegetation samples were collected. These will be analyzed in the KAUST ESM Lab in Thuwal to identify and describe the microbial life forms present inside the SWS for the first time.

Sweeting explains that ecological and biodiversity research was identified as a key SWS output from the project’s inception. “The information generated from the research of this type will not only help form the SWS management strategy, which will be based on ecological data and principles but will deepen the understanding of how desert ecosystems operate generally. The results can, therefore, educate and guide other desert conservation projects worldwide. As a result, the net environmental benefit emanating from the project expands well beyond the sanctuary’s 636 km2 borders.

It is anticipated that a number of internal and external technical research and collaborations with additional academic institutions will be initiated inside the SWS over the coming years to further understand the ecosystem in Shaybah desert and help in protecting the fragile environment in this area.